YEŞİLOVA GULFYeşilova Körfezi (Gulf) lies between Cape Atabol (36°40’27”N-27°57’64”E) of Bozburun Peninsula on the west and 4.4 miles on the south of Kızıl Burun (36°36’60”K-27°57’38”D) to Söğüt Limanı on the east. Yeşilova Körfezi is a large bay and it is indicated as Sömbeki Körfezi in the former charts. The mountains around the gulf are rugged and bared. The coves on the southern part are inhospitable. They are all open to westerlies. There are severe gusts in summer. There are good depths and clear water but, only adequate stop for swimming breaks in calm weather. Provisions can be obtained either from Bozburun Port or Söğüt. Fuel supply is possible from truck tanker in Bozburun.

- Reefs on the eastern part of point Atabol,

An islolated group of rocks (40-50m diameter) stand 700 m S of Point Atabol. There is a beacon on the concrete base with two black conical top marks.  A number of boats have hold their bottoms here. Extreme care should be taken to avoid this area.

- Üçtaş Rocks on the east shores of Söğüt Adası.

Breeze blows from NW on Datça Peninsula. When it enters into Yeşilova Bay, it follows the northern and blows from the west overlaps from NW on the southern shores and swifts from the southwest towards Söğüt Limanı.

Weather :  Mild and rainy, relatively warm in winter and dry in summer.

311 – 3113 B Printed by Turkish Navy, Department of Navigation, Hydrography and Oceanography. 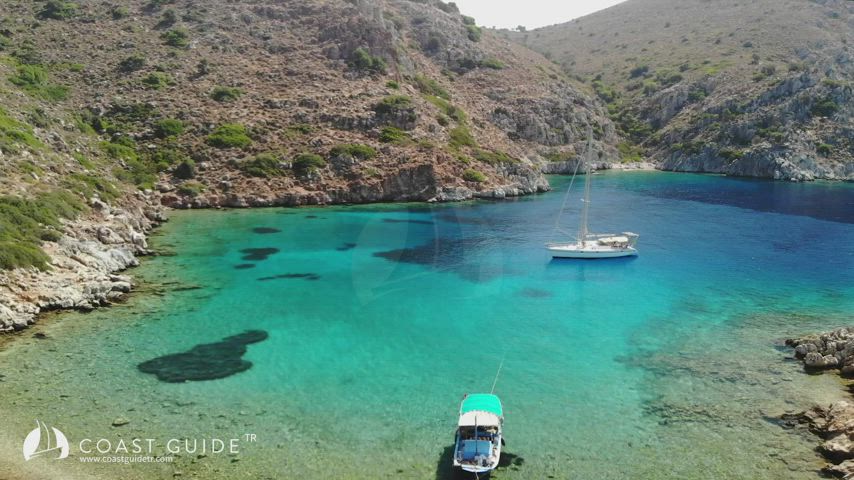