While approaching, houses of the hamlet are conspicuous from a distance. once Haremtan Point or Karaada is breasted, its tremendous castle appears in front. This castle between two bays, was built in 15th century by the knights of St. John of Rhodes. Today this castle is Bodrum museum of Underwater Archeology, one the most important museums.

The bay on the eastern side is known as  district of Roman as people were immigrated from the Create Island. The bay on the western side is called as the district of Turks. A large breakwater extends from the western tip of the castle and hides the sheltering mole. Dead slow speed and good look out must be kept on approaching and heading down into the bay, because boats coming in and out cannot see each other until they come head to head. Regulatory buoys are placed . There are white light towers at the head of breakwaters. FlG 5s 8m 8M and Fl R 5s 8m 8M. The bay on the east is called as Kumbahçe (Kale). Boats can anchor in the depths of 6-10meters. Care is needed for the swimming buoys of the beach. The bottom is weed. Make sure your anchor is dug well. You can take a line to the castle side. This bay affords adequate shelter from breeze, but it is open to southerlies. It is a noisy anchorage as open top disco produces very high volume together with light shows. Right spot for those loving exteme volumes. A disco-vessel leaves at night and cruises to Karaada side, returns at around 04.00 a.m. You better to be off route. There is another anchorage under disco settlements, provides berthing capacity for 50 boats. This quay is called Kumbahce Liman İşletmesi, managed by the municipality port administration (Phone. 252-313 67 69). Water and electricity are provided. Diving and excursion boats berth here. Fuel can be obtained from truck-tanker. The main port of Bodrum for ferries and liners is on the east of this quay. Custom office is located here.

Once, the bay has been entered, coast guard, custom and passport offices are identified behind the ferry jetty on starboard and the marina on the port side, Milta Bodrum Marina. Ferries to Aeagen islands depart from this jetty. Tepecik mosque stands by the opposite side of the entry. Quay surrounds the bay up to marina. The depths are 6m at the entrance and 3m on the quays. This quay is also managed by municipality port administration. The gullets and tripper boats occupy the quays extending on both sides in front of the Tepecik mosque.Water and electricty are on the quay. There is fuel station. No berthing for yachts. The quays on the port are not sufficient for gulets in summer. Sometimes, they anchor from one to another in three rows in the inlet. The parks behind are floricultured among palm tresss. Bodrum is one of the most important fishing and diving centers in Turkey. The native people have been involved in this activity for many years and earned their living. All provisions are available in Bodrum. Public market for clothing on Tuesdays for food stuff on Fridays are arranged.

All sort of transport facilities are avaliable to most destinations. Milas-Bodrum Airport is 30 km, Dalaman Airport is 210 km and Izmir Adnan Menderes Airport is 230 km. All banks branches and ATMs are available.

Diving in Bodrum is a real delight. Guided tours are arranged. You can discover underwater beauties and see so many different fishes and octopuses slots. Bodrum has reach habitats for flora and fauna. Different flowering plants are found in the sea-bed. Meteor sockets, tunnels, caves and amphoras can be seen. Two shallows are especially interesting for divers and underwater photographers. Fish species and nature indiscribable. The depts in diving spots are 5-50 meters, visibility is 20 meters and average temperature is 17-20 C between April to October. Diving instruments are available in the town. Diving courses are arranged.

The Castle is the greatest symbol of the town. The castle was renovated and converted into museum. The Bodrum Museum of Underwater Archeology is one of the most important museums in the world which must be definetely visited to see collection of relics, representing the fascinating life of mariners and shipwrecks. The classical Theatre is within the area of old walled of anchient Halicanassus. The museum is open between 08.00 am to 05.00 pm-in Winter, 09.00 am to 07.00 am in Summer except on Mondays. The Bodrum Amphitheatre is another structure from the reign of King Mausolus. ıt is made up three main parts: Skene (stage), the Orchestra (half-oval part) and the Cavea audience stage. Good example of a classical Greek theatre, with an estimated seating capacity 13,000. Some of the seats at the theatre are inscribed with names probably those who had helped to pay for the theatre. The Bodrum Amphitheatre is used for concerts and shows. Well preserved and definetely worth visiting.

Boat building in Bodrum has played an important role. The workmanship within the possibilities are still tremendous. Prestige boats are produced in boat yards in İçmeler. Traditional Bodrum wooden boats race has been organized in october since 1989 to promote sailing for regional boats and gullets. It is tremendous view to see hundreds of gullets sailing together down to Gökova.

There are number of boat yards around. All kinds of mechanical, carpentary, upholstery, electrical and winterizing works can be carried out. 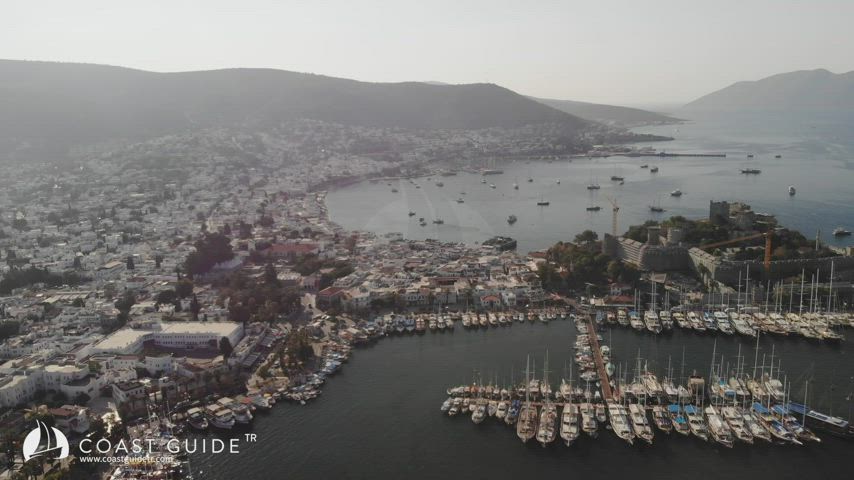